Nashville-based National Council of La Raza affiliate partner, Conexion Americas, the beneficiary of a $250,000 donation from Randy Boyd and his wife Jenny, wants Governor Haslam to veto the anti-sanctuary city bill so that criminal illegal aliens can return to Tennessee communities instead of being handed off to federal immigration authorities.

The founder and director of Boyd’s quarter-million dollar beneficiary, has put out a call to ask the Governor to veto the legislation.

In 2015, the year before Boyd made his $250,000 donation, Renata Soto, co- founder and executive director of Conexion Americas, who had served for three years as vice-president of the National Council of La Raza Board, was elected to president of La Raza’s board, a position she still occupies.

In July 2017, the George Soros-funded National Council of LaRaza changed its name to UnidosUS. 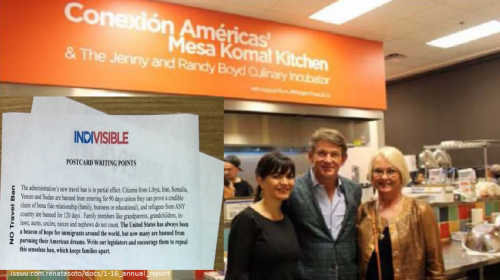 During an early radio interview, Boyd inferred that he is okay with illegal aliens using the Conexion Americas culinary incubator renamed “Conexion Americas Mesa Komal Kitchen & The Randy and Jenny Boyd Culinary Incubator” after his donation, to start businesses when he compared it to policing dog parks:

We in Knox County can’t be policing our dog parks and make sure that only the people we think should use them use them.

Several months before Boyd’s “historic investment” the largest donation in Conexion since its founding, Boyd launched his education non-profit Complete Tennessee with Soto as a Board member.

Among the GOP gubernatorial candidates Boyd has consistently been the last one to denounce sanctuary city policies.

The Randy Boyd campaign, despite being asked directly by The Tennessee Star for a comment regarding the proposed Nashville ordinance, did not respond. Days later, Boyd’s campaign issued a statement opposing illegal immigration and sanctuary cities. Boyd also urged residents of Davidson County to tell their Metro Council members to oppose the proposed sanctuary city ordinace.

The same pattern among the GOP gubernatorial candidates responding to HB2315, the anti-sanctuary city legislation waiting for Governor Haslam’s signature has been repeated.

Both Diane Black and Bill Lee issued statements just days after the bill was passed. Black called on the Governor to sign the bill and Lee said if he were governor he would sign it. Beth Harwell had voted to pass the bill and signed it for transmission to Haslam.

Again, Boyd was behind the pack. His campaign failed to issue a statement until a week after the other candidates. And when a statement was issued, it quoted Boyd campaign spokesman Chip Saltsman, not Boyd himself.

The Boyd campaign’s carefully worded statement avoids any opinion or preference as to whether he would like to see the bill signed by Haslam. The timing of Boyd’s statement and its wording suggests either that Boyd waited to comment until after consultation with the Governor’s office or will be a way to avoid conflict with assisting organizations that support illegal aliens in Tennessee.