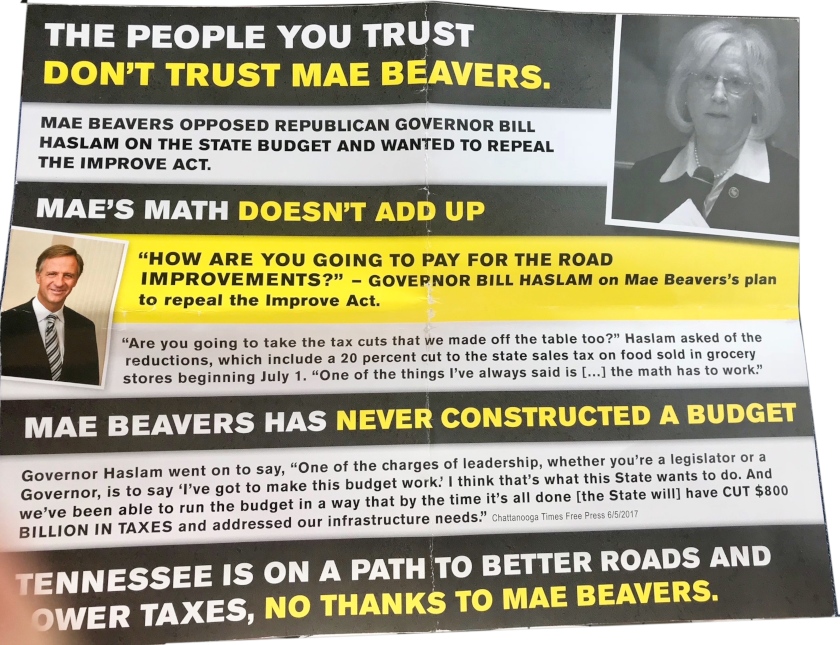 The Tennesseans for Common Sense PAC, with leadership that includes longtime liberal Democrat activist Carol Andrews, is also running radio ads, purchased at least one billboard and has done one county wide mailing so far. The PAC, in the supposedly non-partisan County Mayor’s race, clearly intends to help re-elect Democrat Randall Hutto.  Andrews herself is a candidate for the Democratic Party State Executive Committee in the August 2 Democrat Primary.

The Democrat PAC is targeting Beavers for her vote in opposition to the Improve Act, which Hutto favored. The Improve Act raised fuel taxes and registration fees about $350 million a year at a time when  Tennessee enjoyed a $2 billion surplus. A narrow majority of Republicans in the House supported the tax increase, 37-35, but proponents relied on Democrat votes to get enough to pass it.  Beavers was one of only about 6 Republicans in the Senate to vote against the tax increase. 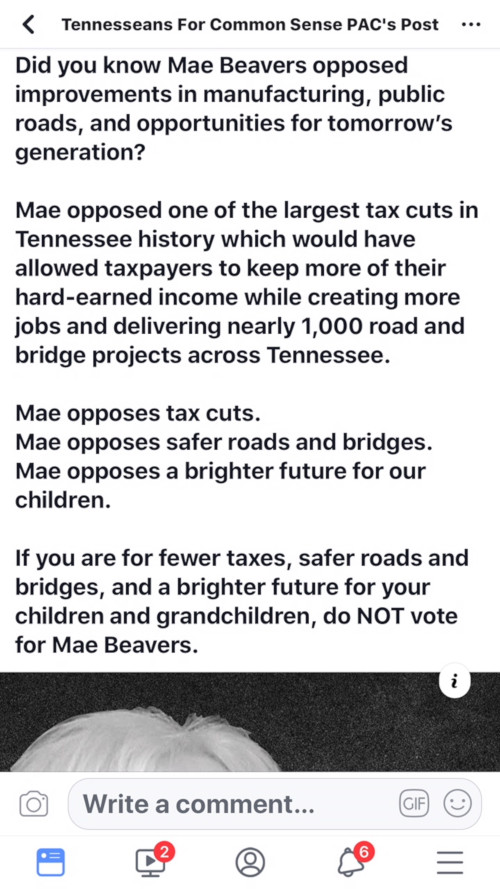 The IMPROVE Act also “cut” the Hall Income tax, but that tax cut had been passed the previous year, and Beavers supported it. Additionally, the Act cut Franchise and Excise taxes by $112 million, but half of that cut goes to just 24 companies in Tennessee.  Bottom line is that most Tennesseans will pay much higher taxes under the IMPROVE Act, which is why Tennessee can spend more on road improvements and construction thanks to the increased revenue from the higher taxes.

Beavers says that Hutto told her months ago that he hoped it would be a “clean campaign,” but that his actions and those of his Democratic Party allies speak louder than words. “Wilson County has been put deeply in debt because of the Hutto Administration, and we will face huge tax increases in the future if we don’t take immediate control of our spending and debt load,” Beavers pointed out.

“The Democrats clearly want the big tax and spend policies of the Hutto Administration to continue and they know their gravy train will end if their smear campaign against me doesn’t work. Fortunately, most voters in Wilson County are aware of my record of consistently leading the fight against higher taxes as a county commissioner, State Representative and State Senator and hopefully they won’t be fooled by this late flurry of outlandish lies.”