The Democratic-Farmer-Labor (DFL) Party’s final report in the investigation of Rep. Keith Ellison (D-MN-05) reveals that the congressman admitted to calling his accuser a “b—-” and threatened her for thinking of taking her allegations public.

The 15-page report prepared by Minneapolis attorney Susan Ellingstad details the relationship between Ellison and his ex-girlfriend Karen Monahan, who claims that she was forcibly dragged from a bed by Ellison while he shouted expletives at her. The report also includes testimony from five witnesses, three of whom corroborate Monahan’s story.

“One long-time friend stated that in late 2016, Ms. Monahan contacted him because she was upset and wanted help getting her things from Mr. Ellison’s home. This friend said Ms. Monahan told him about the incident or Mr. Ellison trying to drag her off the bed, and expressed that she was scared of Mr. Ellison,” Ellingstad writes in her report. 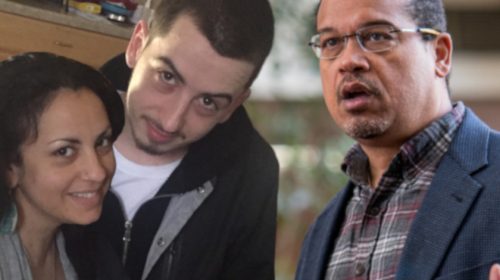 Ellingstad goes on to relate the account of two other friends who claim that Monahan told them “the entire story including the incident on the bed.” Two more witnesses noted that they were aware of “chaos” in the relationship, but did not know of any physical altercation.

In private interviews with Ellison, the congressman admitted to Ellingstad that he “recalled only one time” when he called Monahan a “b—-” after “an argument over purchasing something that he thought was too expensive.”

The alleged incident occurred the next morning when Ellison asked Monahan to “take the trash out” before he began shouting at her and attempted to pull her off of the bed.

“B—-, get the f— out of my house. You’re a bad guest,” Monahan recalls Ellison saying, though Ellison has repeatedly denied the accusation and told Ellingstad that he got ready that morning and left for a “canoe trip.”

According to the report, their relationship began to deteriorate from that point on and the two were eventually split up by 2017, though they continued to communicate via text. In several text messages, Monahan suggested that Ellison was responsible for “narcissist abuse,” while Ellison indicated that he regretted breaking up and missed Monahan.

In one text exchange obtained by Ellingstad, Ellison threatened to “prove to you that I am serious” if Monahan took any details of their relationship public.

“No one can stop you from printing your thoughts about whatever in a diary. But Karen I cannot allow you to publish material about me. You may not publish material about our relationship Karen. I mean it. Please don’t make me prove to you that I am serious. Don’t do this. It violates my privacy,” Ellison texted Monahan, asking her why she can’t just “move on.”

Ellingstad ultimately concluded that the allegations against Ellison are “unsubstantiated,” a conclusion she reached based on Monahan’s decision to withhold the alleged video of the incident.

“Ms. Monahan claims to possess evidence that could conclusively corroborate her allegation as well as potentially answer all of the questions surrounding it, if it occurred, but Ms. Monahan has chosen to withhold that evidence,” Ellingstad wrote. “That the accusing party claims to have but refuses to provide key, dispositive evidence that the accused party has flatly denied, causes me to conclude that the allegation is unsubstantiated.”

The DFL is currently seeking a local law enforcement agency to review Ellingstad’s report as a final step in the process, but none are able to until a criminal complain is filed by Monahan or another interested party.