The numbers for the end of Fiscal Year 2018 are in and they aren’t pretty for fiscal hawks, as the budget deficit increased by an eye-popping $113 billion to $779 billion.

But it had nothing to do with tax cuts. Tax receipts rose by $14 billion. All of it was because spending increased, and more than half of it was because gross interest owed on the national debt spiked by $65 billion to $521.5 billion.

That bit is unsurprising, as 10-year treasuries interest rates have jumped from 2.2 percent in Sept. 2017 to 3.1 percent today.

With $21 trillion in debt, for every percentage point interest rates increase, that’s another $210 billion U.S. taxpayers will owe on the debt long-term.

The other half of the deficit increase was a jump in spending that was already baked into the cake, largely in areas like Social Security, Medicare and defense spending.

What’s amazing is that Social Security and Medicare spending have not been growing faster, considering how rapidly the population 65 years old and older has been expanding, but inflation was much lower the past decade following the financial crisis, resulting in a smaller cost of living adjustments. But our luck may not last forever there, particularly as inflation normalizes or becomes a concern down the road. 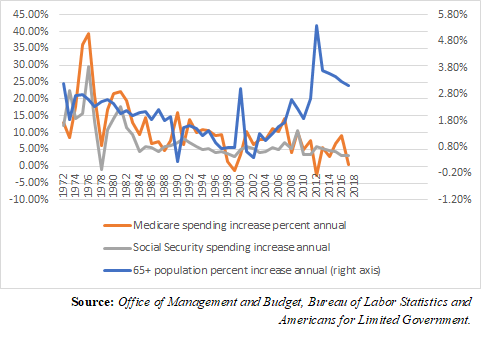 One thing that cannot be said of the budget deficit, however, is that it had anything to do with tax cuts in Fiscal Year 2018. In fact, tax receipts increased $14 billion to $3.328 trillion. That, even as corporate tax collections fell by $92.3 billion. That was offset by a whopping $96.4 billion increase in individual tax collections to $1.68 trillion.

The trick there, and the reason individual collections did not fall, was because 1.6 million people found jobs during the past 12 months. By that measure, cutting corporate taxes was a policy success, creating more corporate income by which to hire Americans to do jobs.

Unfortunately, that was not enough to offset the increases in spending and the interest rate hikes. However, there’s not much that can be done about the interest rates, which are set largely by investors in Treasuries markets.

That is why Congress needs to reconsider its approach to spending. The budget that was submitted by President Trump gets to balance in 10 years with approximately $4.5 trillion of spending cuts, including repealing Obamacare.

With the costs of the Baby Boomers retiring bound to start eating much greater portions of the budget, finding budget savings where they can be found now would seem to be the prudent course of action. With the economy growing and revenues rising, the problem with the deficit is not the tax rate, it’s the spending.

Robert Romano is the Vice President of Public Policy at Americans for Limited Government.

Reprinted with permission from DailyTorch.com