New Zealander Trevor Loudon, who has for three decades investigated the backgrounds of left wing politicians, organization leaders and political media outlets around the world, will speak in Rochester, Minnesota on Tuesday, October 23rd.

The focus of his talk will be Minnesota candidates for public office with a special focus on US Representative Keith Ellison (D-MN-07) the 2018 Democrat candidate for Attorney General for Minnesota.

Loudon became known to many Americans through his 13-year-old website, New Zeal, where much of his investigative research has been published. He is passionate about America and is, by his own admission, driven by a desire to save western civilization from what he sees as its two great threats: radical Marxism and Islamic supremacism.

From his website we learn that he hails from Christchurch and that he is a widely published author, perhaps most well-known for his 2013 book, THE ENEMIES WITHIN: Communists, Socialists and Progressives in the U.S. Congress.

During his 30-year career of researching radical left, Marxist and terrorist movements, the controversial Loudon has come to believe “that these forces must be exposed and countered, as America’s continued role as a bastion of freedom is pivotal for the future of western civilization.”

Since 2011, Loudon has traveled throughout the US to share his knowledge.  He has addressed over 400 conservative, tea party, religious and Republican groups in more than 37 states, he says.

Most recently Mr. Loudon, with the help of the Washington, DC based Center for Security Policy, published a short, but powerful, book on the life and career of six-term Minnesota Representative Keith Ellison.

Ellison is  perhaps best known for being the first Muslim member of Congress and less known for his roots in the radical left/progressive movement now insinuating itself deeply into the Democrat Party. 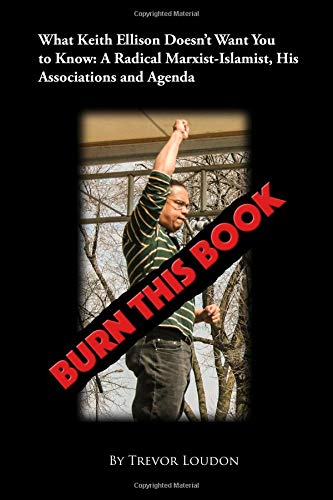 An introduction to the extensively footnoted Burn this Book at Amazon gives us a hint about what we will learn in Rochester this week:

Loudon performs a public service by thoroughly documenting the funding and support that Keith Ellison has received from the likes of the Minnesota Communist Party, the Muslim Brotherhood, and the communist Democratic Socialists of America.

Anna Marie Bolton is a reporter for The Minnesota Sun.