INNSBROOK, Virginia – Members of Virginia Trump delegation gathered at a local Innsbrook bar Thursday evening to celebrate the fourth and final night for the Republican National Convention, and the official nomination of President Donald Trump and Vice President Mike Pence.

Bishop Leon Benjamin, a congressional candidate in Virginia’s fourth district, was the main speaker and crowd-pleaser of the event, offering a plethora of proclamations about the upcoming election and the efforts of delegation.

“This is our greatest hour,” Benjamin announced to the crowd. “Every delegate, every alternate delegate, you are wonderful. This is a sure win on November 3rd, a landslide!”

The overall feelings  and sentiment of guests on the Republican convention and the job Trump has done during his term so far were as one would expect: extremely positive.

“The convention has been phenomenal so far because the little people [the convention] has focused on makes the point that people across America support President Trump,” said Michael Thielen, executive director of the Republican National Lawyers Association and state-wide alternate Trump delegate.

Pam Brown, a delegate from Norfolk, specifically mentioned the privilege she felt being part of the delegation.

“It’s the honor of it, ok.” Brown said in an interview with The Virginia Star. “You realize that 330 million people [in America], only 2,542 people get to be on the convention floor to nominate the candidate for your party. That’s pretty special, there is nothing quite like it.”

After Benjamin had handed off the mic, he expressed his own pleasure with the convention to The Star. 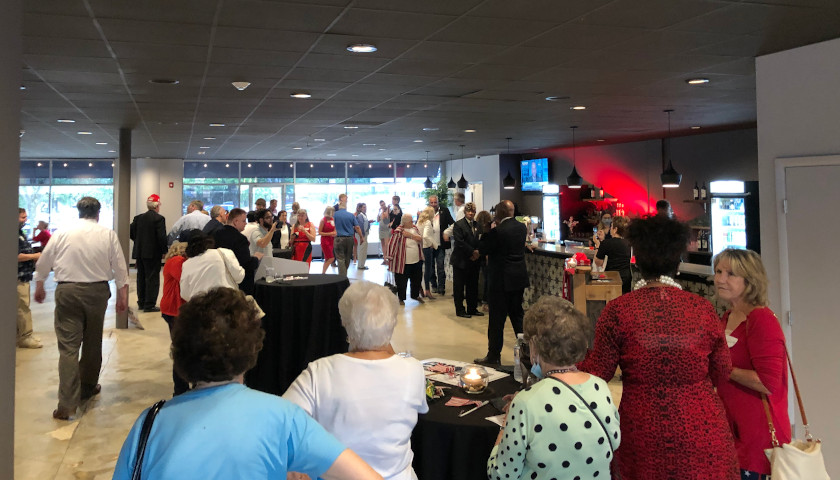 “[The convention] has gone great, I believe that it has definitely put out there the contrast between where our nation can go and where we don’t want it to go. So, I believe it’s been a great display of not just diversity but unity because that’s what our nation needs right now.”

As much as the event was about capping off the final night of the convention, it was equally a celebration for the Virginia delegation and their work.

“It’s disappointing nobody got to go to Charlotte,” Tim Hugo, a former member of the Virginia House of Delegates and one of the sponsors for the event, told The Star. “That’s [one of the reasons] I wanted to help sponsor tonight, just to give everybody a little boost and say thank you, because these men and women [were] going to put their money and time into going to the convention.

“I’m sorry it didn’t work out, but we can have a little fun, watch a great speech tonight and then get ready for election day”

When asked what people were looking forward to the most if Trump were to win a second term in the White House, many of the answers revolved around the same themes: securing America’s borders, continuing to strengthen the economy and the need for law and order.

Jacob Taylor is a reporter at The Virginia Star and the Star News Network. Follow Jacob on Twitter. Email tips to [email protected]

John Fredericks is the publisher and editor-in-chief of The Virginia Star.
He is also a Trump 2020 delegate and the chairman of the Trump Virginia Delegation.