As the Trump Train drove past, some spectators waved matching signs or honked back. Others protested with signs for Biden and other Democratic candidates. Organizer and candidate for Richmond’s first city council district Mike Dickinson told The Virginia Star that protestors at Richmond’s embattled Lee Monument tried to block the procession and threw bottles at some cars. 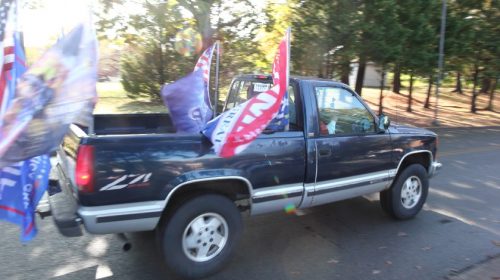 “Henrico, it was great. We had a lot of positive reaction in Richmond until we got to the Lee Monument. That area is a crime zone,” Dickinson said.

The Richmond Police Department (RPD) reported that protestors at the Lee Monument clashed with Trump Train participants.
“The mobile rally drove to the Lee Monument circle at Monument and Allen avenues and confrontations with individuals at the circle ensued. Some of the vehicles left the roadway and crossed grassy medians near the area, ” the RPD posted on Facebook on Sunday evening.
“At approximately 4:18 p.m. an adult female who was at the circle reported, she was pepper sprayed by an unknown individual from a vehicle. A few minutes earlier, officers responded to the 1800 block of Monument Avenue (near the Lee circle) to investigate a report of an unoccupied vehicle struck once by gunfire.”
The RPD said no other injuries were reported and that officers closed the circle to traffic and continued to monitor it throughout the night.
Dickinson said, “There were protesters waiting for us, they’re not just protesters, there were like violent criminals there waiting for us today. We had bottles thrown at us, people’s cars were attacked, they tried to block traffic.”

Dickinson has run to be a U.S. congressman, a Virginia delegate, considered a run for Richmond mayor, and is now running for Richmond city council. He is a former strip club owner who, according to Ballotpedia, has had a checkered past on social media.  After becoming a Mormon a few years ago, he switched from Democrat to Republican. As a result, he might seem like the sort of perennial candidate more elite politicians disregard. However, Dickinson is doing what more mainstream Richmond Republicans have struggled with – mobilizing hundreds of energized Trump supporters.

The Trump Train was an encore of Dickinson’s performance from a week before, when about 500 people turned out on Saturday, October 24, for a similar procession. In contrast, the day after the first Trump Train, Republicans in nearby Chesterfield County held a get-out-the-vote rally. Perhaps due to the rain, only about 150 people attended the event in a covered arena – even though the rally featured Republican superstar Senators Ted Cruz (R-Texas) and Rand Paul (R-Kentucky.)

Dickinson told The Star, “I think people like anything they can do to come out and support the president. People feel good about when they’re around other people where they can give support and they don’t feel scared or intimidated. They’re around people that they feel safe with.” 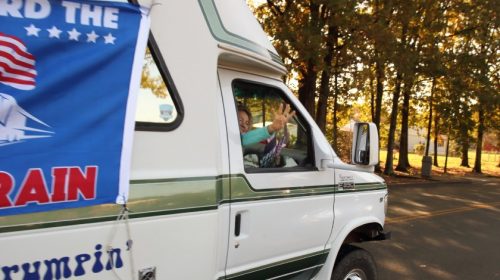 “I think that people like coming to something that’s interactive. I think ultimately people want to be involved and speak their mind. If they’re in a Trump Train like this, they feel like they’re doing their part to go out and fly their flag and show their support publicly,” Dickinson said.

Dickinson said the Trump Train was more about supporting Trump than his own campaign for city councilman, motivating his route choice. He said, “I wanted to do western Henrico, because no one’s done one out there, and the western part of Richmond where I’m running at, so I can let people know that there is a conservative Republican president, there is a Trump-supporting presence for the area, and so that people feel comfortable so that they can say that they support [Trump.]”

“You know if you go through my neighborhood and the West End of Richmond, you don’t see any Trump signs at all because people are afraid to put them up,” Dickinson said.

In a speech before the procession started, Dickinson said, “We’re all here today because we love America and we love President Trump and everything he’s doing to keep the cameraman dream alive in all of us.”

“I love the red, white, and blue of the flag. I love what that flag stands for. I love that we have a military and we have people that have gone for and given their life to fight for it. And I love that President Trump stands up for the flag time, and time again, ” Dickinson said. “God bless all of you for coming today, God bless the United States, and please, election day, it’s more important now than ever.”