Call it the Emmy-nominated Virginia Department of Health (VDH) now. On Tuesday, the VDH announced that a short video advertising the state’s COVID-19 tracking app has been nominated for a regional Emmy and won a Silver Telly Award.

The “Students for COVIDWISE” video features teens talking about the impact the COVID-19 shutdown had.  Flipping seamlessly through speakers, teens said, “I was a 2020 high school graduate, and thanks to COVID-19, I missed my high school prom. I missed my senior class trip. I missed my graduation party.” 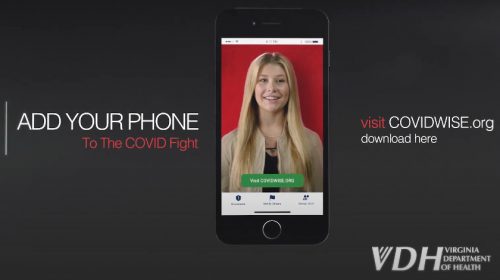 The video highlights the COVIDWISE app as a solution: “We can help keep our communities healthy and ensure students get back to the classroom where they belong,” one speaker said.

The app was launched last August, and had 356,777 downloads by mid August. However, in October media including The Virginia Star reported that only 13.5 percent of Virginia cell phone users had downloaded the $229,000 app, boosted with $1.5 million of marketing spending.  ABC8 reported 650,000 downloads in mid-October. “Students for COVIDWISE” went live around the same time.

Since then, about 2.1 million Virginians have downloaded the app, according to the VDH press release.

VDH contracted with Virginia State University’s Advanced Creative Services to create the video. Multiple Emmy-winner Jesse Vaughan Jr. directed the video. The video is nominated in the Public Service Announcement (Campaign) and the Short Form Content (Under 10 minutes) categories in the National Capital Chesapeake Bay Chapter of the National Academy of Television Arts and Sciences.

“Right away, it possessed an emotional fabric because people can all relate to how COVID has affected them in all aspects of their lives,” Vaughan said in a VDH press release. “And in this case, it was young people, so not only were they involved in the storytelling process, but they were also involved in being on camera and telling parts of their story. And I like that part of it because it wasn’t just about conveying technical knowledge about the app, but it was personalizing the whole process of the importance of having the app.”

“The high school and college graduates of 2020 lost many once-in-a-lifetime moments due to COVID-19, forming the genesis of the ‘Students for COVIDWISE’ campaign,” VDH Chief of Staff Jeff Stover said in the release. “A Telly Award and two Emmy nominations are a magnificent way to acknowledge and honor their sacrifices.”

Eric Burk is a reporter at The Virginia Star and the Star News Network.  Email tips to [email protected].