RICHMOND, Virginia – After hammering out a compromise between the House of Delegates and the Senate, the Virginia General Assembly voted to send its American Rescue Plan Act (ARPA) budget bill to Governor Ralph Northam. The bill passed the House 78-20 and passed the Senate 23-16.

Senate Finance Committee Chair Janet Howell (D-Fairfax) said that she and other senators fought for the Senate’s amendments in a conference committee with representatives from the House.

“As you look at the conference report you will see that on several items our position was affirmed, and on others we were able to compromise,” she reported to the Senate. “This conference report represents some compromises but it does contain the requests that are important to their entire Senate: funding for items such as broadband,  the unemployment trust fund, water and infrastructure, tourism and business support,  and education at all levels. It also provides much-needed support in the area of mental health and additional compensation for our workforce where the pandemic is exacerbating our ability to hire and retain needed employees.”

“The conference report for HB 7001 contains a total of 19 line amendments. Although the majority of these line amendments are technical in nature, some are related to new totals resulting from actions on the amendments. In combination, the amendments add $38.1 million in spending, leaving about $1.1 billion available in the upcoming biennium,” House Appropriations Committee Chair Luke Torian (D-Prince William) said on the House floor.

Some of the compromises in the bill include a bonus reduced from $5,000 to $3,000 for state-funded sheriffs’ deputies. Virginia provides some funding to localities to help pay for some deputies, but localities can opt to hire more than those funded by the Virginia. The proposal provides bonuses only to positions paid for by the commonwealth. Localities receive their own ARPA funds as well and may opt to pay bonuses to any remaining deputies. The compromise also provides $3,000 bonuses for Department of Corrections staff. An additional compromise adds $2.5 million for violence reduction programs.

Another compromise still requires Virginia DMVs to open up to walk-in, in-person service, but now includes a provision allowing the agency 30 days to develop a plan and then another 30 days to enact the plan.

Discussion in the Senate

The bill was only briefly discussed in the House and received significant bipartisan support in the House. Only two Republican senators voted for the bill.

Before the vote, Senator David Suetterlein (R-Roanoke) questioned Howell’s perspective on the report. He noted that the compromise includes “new-anti-gun legislation that wasn’t in the Senate or the House. It looks like the administration prevailed in that sense.” 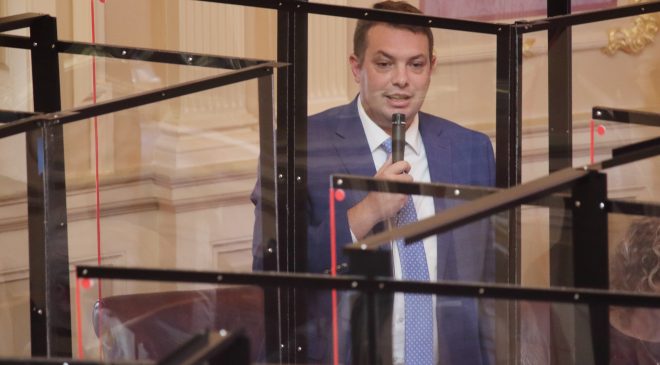 “I can’t seem to find where the Senate provisions prevailed in their entirety. We won a, I guess, partial victory on DMV,” Suetterlein said. “So I congratulate the Senator from Fairfax City [Senator Chap Petersen (D-Fairfax)] for perhaps one of the only ones I could find.”

“I am going to be voting against this budget,” Senate Minority Leader Thomas Norment, Jr. (R-James City) said. “There are a lot of good things in it, I’m not impressed with the process.”

“I appreciate the work that the budget conferees did, but I regret that I’m unable to support it,” he said.

Petersen warned that he expected a partial ban on evictions to face legal challenges. Similar to an expired ban previously in place, the ARPA bill bans landlords from evicting residential tenants for nonpayment of rent if the residents have qualified for unemployment or faced a pandemic-related financial hardship. It requires landlords to apply for the Virginia Rent Relief Program on behalf of their clients. Landlords can evict if tenants don’t apply or cooperate in the rent relief application, if the application is denied, if there is no response within 45 days, or if the rent relief fund is empty, according to the Legal Aid Justice Center.

“We’ve had basically what will end up being a two-and-a-half-year restriction on landlords being able to rent their property and evict people that don’t pay the rent,” Petersen told The Virginia Star.

He cited the Virginia Constitution: “Article one, section eleven protects the right of contract, and it was sort of one thing during the height of the pandemic, but we’re a year past that now.” 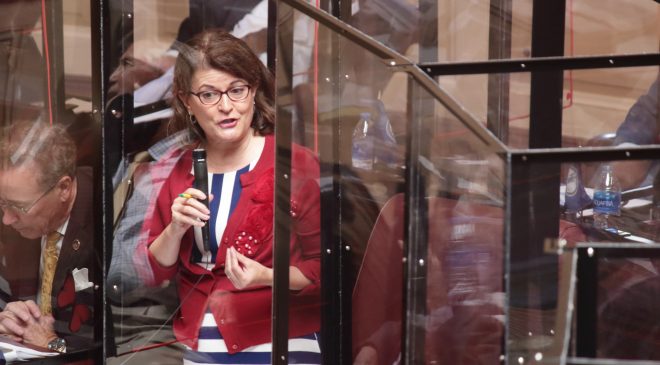 Senator Emmett Hanger, Jr. (R-Augusta), who voted for the bill, was one of the senators in the joint conference committee; he had also helped work on the original bill in the Finance Committee. He said Governor Ralph Northam had opposed any amendments to the initial proposal, but on Friday senators successfully defended some of the amendments.

He said, “When we met Friday morning, there was basically an initial push back from the House and the administration about amendments, that we weren’t going to entertain amendments. That’s the way they wanted it. And our position prevailed then after a while that we would have amendments, because that’s the only way for everybody to be able to represent their viewpoints.”

“We isolated about ten different items in the conference, and we addressed them one way or another. Several of them, like the issue of the evictions, who that applies to, that was taken care of administratively. The Attorney General and the Governor issued clarification that it doesn’t apply if you have fewer than four units,” Hanger told The Star.

In addition to the bonuses for deputies and corrections officers and the DMV requirements, Hanger highlighted a provision that extends the Medicaid 12.5 percent increase. Despite pressure from the administration, that provision survived, enabling the General Assembly to continue that increase in an upcoming regular session.

Hanger said that overall, the process went better for Republicans than expected. “With the help of a couple Democrat votes, we got a better process on the Senate side in terms of entertaining amendments,” he said.

But Republicans remain frustrated with the judicial selection process to fill eight Court of Appeals seats. On Monday, Democrats announced their eight candidates for the first time; on Tuesday, legislators will have a chance to interview the candidates before voting on them.

However, although Senate Judiciary Committee Chair John Edwards (D-Roanoke) said Senate Democrats agreed to allow Republicans to propose candidates as well, House Democrats announced that they would not consider any Republican-proposed candidates.

Senator Mark Obenshain (R-Rockingham) said, “I appreciate the Senator’s suggestion that the Senate Courts of Justice Committee or Judiciary Committee is willing to extend an additional courtesy of interviewing conditional candidates if they are requested to do so, but my question is: Isn’t that a fool’s errand anyway given the fact that the House has already announced that it does not intend to interview any additional candidates?”