The Fifth Circuit Court of Appeals ruled on Friday to keep its stay of the Occupational Safety and Health Administration’s (OSHA) emergency rule that would require employers of more than 100 employees to mandate COVID-19 vaccines in place, determining that the private businesses challenging the rule were likely to win their case.

The case is BST Holdings v. OSHA, No. 21-60845. BST Holdings, along with a host of other companies and several states, including Louisiana, Texas, South Carolina, Mississippi and Utah, sued President Joe Biden’s OSHA to halt the vaccine mandate.

The court noted in its decision that an obscure provision of the 1970 Occupational Safety and Health Act, authorizing the agency to issue an “Emergency Temporary Standard” (ETS), violates the 1950 Administrative Procedures Act, which says that all rule-making procedures of federal government agencies and departments must go through a lengthy public comment procedure before their issuance.

ETS had only been invoked ten times in 50 years. Six of those ETSs were challenged in court, and only one survived the challenge.

The Congressional Research Service identified the disposition of all 11 ETSs established by OSHA since Congress granted the agency ETS authority in the 1970 law in a report issued and updated on November 10, 2021. Note that all nine ETSs between 1971 and 1983 dealt with substances or hazards as specified in the enabling legislation.

The Biden administration’s OSHA issued two ETSs in 2021 — the first such issued by the agency since 1983, and the first time it attempted to use the authorizing legislation for a virus – which is neither a “substance” nor a “hazard” as defined in the 1970 enabling legislation. 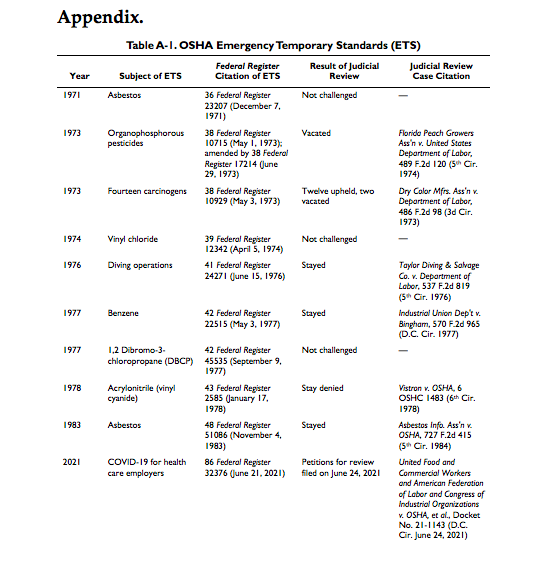 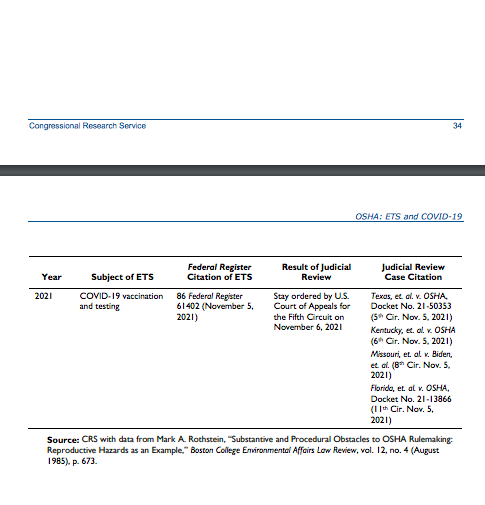 The court also noted that during the Trump administration, just three months into the COVID-19 pandemic in June of 2020, that OSHA reviewed the requirements of issuing an ETS and determined that is was not legally warranted.

Section 6 of The Occupational Safety and Health Act of 1970 reads:

(1) The Secretary shall provide, without regard to the requirements of chapter 5, title 5, United States Code, for an emergency temporary standard to take immediate effect upon publication in the Federal Register if he determines —

(A) that employees are exposed to grave danger from exposure to substances or agents determined to be toxic or physically harmful or from new hazards, and

(B) that such emergency standard is necessary to protect employees from such danger.

The OSHA Act of 1970 makes no mention of viruses, which aren’t considered “substances or agents determined to be toxic or physically harmful.”

The three judge panel said in its 22 page opinion:

The Occupational Safety and Health Administration (OSHA) “reasonably determined” in June 2020 that an emergency temporary standard (ETS) was “not necessary” to “protect working people from occupational exposure to infectious disease, including COVID-19.” In re AFL-CIO, 2020 WL 3125324, at *1 (D.C. Cir. June 11, 2020). This was not the first time OSHA had done this; it has refused several times to issue ETSs despite legal action urging it do so. See, e.g., In re Int’l Chem. Workers Union, 830 F.2d 369 (D.C. Cir. 1987) (per curiam). In fact, in its fifty-year history, OSHA has issued just ten ETSs. Six were challenged in court; only one survived.

The reason for the rarity of this form of emergency action is simple: courts and the Agency have agreed for generations that “[e]xtraordinary power is delivered to [OSHA] under the emergency provisions of the Occupational Safety and Health Act,” so “[t]hat power should be delicately exercised, and only in those emergency situations which require it.” Fla. Peach Growers Ass’n v. U.S. Dep’t of Lab., 489 F.2d 120, 129– 30 (5th Cir. 1974).

This case concerns OSHA’s most recent ETS—the Agency’s November 5, 2021 Emergency Temporary Standard (the “Mandate”) requiring employees of covered employers to undergo COVID-19
vaccination or take weekly COVID-19 tests and wear a mask.  An array of petitioners seeks a stay barring OSHA from enforcing the Mandate during the pendency of judicial review. On November 6, 2021, we agreed to stay the Mandate pending briefing and expedited judicial review.

Having conducted that expedited review, we reaffirm our initial stay

“The Constitution vests a limited legislative power in Congress. For more than a century, Congress has routinely used this power to delegate policymaking specifics and technical details to executive agencies charged with effectuating policy principles Congress lays down,” Judge Kurt D. Engelhardt wrote in the Court’s majority opinion.

“But health agencies do not make housing policy, and occupational safety administrations do not make health policy.  In seeking to do so here, OSHA runs afoul of the statute from which it draws its power and, likely, violates the constitutional structure that safeguards our collective liberty,” the majority opinion continued:

For these reasons, the petitioners’ motion for a stay pending review is GRANTED. Enforcement of the Occupational Safety and Health Administration’s “COVID-19 Vaccination and Testing; Emergency Temporary Standard”22 remains STAYED pending adequate judicial review of the petitioners’ underlying motions for a permanent injunction.

In addition, IT IS FURTHER ORDERED that OSHA take no steps to implement or enforce the Mandate until further court order.

In addition to the many reasons ably identified by Judge Engelhardt’s opinion, I underscore one reason why these challenges to OSHA’s unprecedented mandate are virtually certain to succeed. Courts “expect Congress to speak clearly when authorizing an agency to exercise powers of ‘vast economic and political significance.’” Ala. Ass’n of Realtors v. Dep’t of Health & Human Servs., 141 S. Ct. 2485, 2489 (2021) (quoting Utility Air Regul. Grp. v. EPA, 573 U.S. 302, 324 (2014)).

Whether Congress could enact such a sweeping mandate under its interstate commerce power would pose a hard question. See NFIB v. Sebelius, 567 U.S. 519, 549–61 (2012). Whether OSHA can do so does not.

OSHA is expected to appeal the Fifth Circuit’s ruling to the Supreme Court, according to David Vladeck, a professor of law at Georgetown University, who thinks the nation’s highest court will affirm the ruling.

“There are justices on the court who want to rein in the administrative state and this is a case in which those concerns are likely to come to the fore,” Vladeck reportedly said.

Devin Watkins, an attorney for Competitive Enterprise Institute, told The Tennessee Star the Fifth Circuit’s ruling is a “devastating blow to this illegal and unconstitutional mandate.”

“The decision declares that the mandate ‘far exceed current constitutional authority.’ This is based on the fact that the choice to remain unvaccinated is noneconomic inactivity and so outside the power of the Federal Government under the Commerce Clause. Only states have the police power that would allow this, as the Supreme Court held in Jacobson v. Massachusetts,” Watkins said. “The court found the mandate is not necessary especially for naturally immune unvaccinated individuals. OSHA’s arguments were undermined by its own prior statements that Covid did not meet the standard the statute required.”

The lawyer added, “In the next week, the multi-district litigation provision will bring all challenges into a single circuit court. That circuit may reverse the stay that the Fifth Circuit imposed. If so, that would create a conflict between the circuits as to if a stay was appropriate that would be a strong reason for the Supreme Court to consider itself if a stay is appropriate. The Supreme Court has recently been skeptical of such massive unprecedented claims of federal power over state authority. If the Supreme Court agrees with the Fifth Circuit, that will likely be the death knell for this mandate, as by the time the normal litigation schedule is complete Covid may be a distant memory.”

Pete D’Abrosca is a contributor at The Tennessee Star and The Star News Network. Follow Pete on Twitter. Email tips to [email protected].