In his speech at the Republican Party of Virginia (RPV) Advance, Glenn Youngkin got applause and cheers, but Lieutenant Governor-elect Winsome Sears also earned laughter with her Saturday keynote address that was part victory speech, part stand-up comedy routine aimed at Virginia’s Democrats and identity politics.

The crowd of RPV insiders at the gala erupted when she took aim at outgoing Governor Ralph Northam. 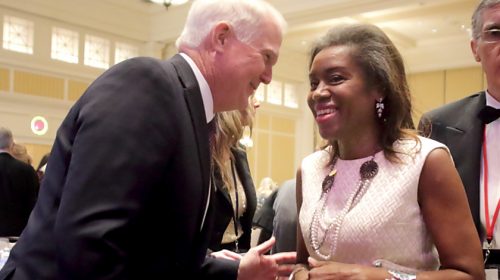 “Oh yeah. They got four years of me, and they were hoping they wouldn’t. But it’s going to be fun. It’s just going to be fun, because we are, as I’ve said, we are destroying all their narratives,” Sears said.

Sears spoke at the end of the Advance, the emotional high point. She emphasized the importance of individuals to the RPV’s 2021 wins while exhorting them to stay engaged.

“I saw twenty years ago, when we won, we had the biggest freshman class ever. And we had a supermajority,” Sears said. “And then we left. We went home. And the very next time there was an election we started a losing streak.”

Sears said, “We can’t do that anymore. We have an organization. We have to keep it going. You see what happens when we work together. We win, and we win big, baby!”

RPV Executive Director Ken Nunnenkamp, Jr. told The Virginia Star, “She’s great, isn’t she? How can you not like her?”

“She’s refreshingly honest and straightforward, and I think that connects really well with people,” Nunenkamp said. 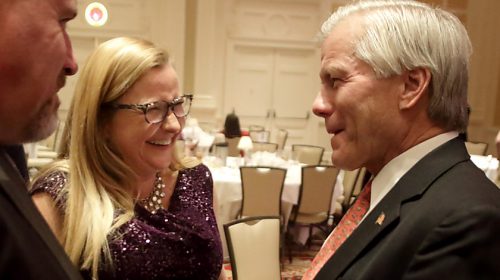 Former Governor Bob McDonnell told The Star that he’s known Sears since she first defeated a long-time incumbent in a House of Delegates race about 20 years ago, before she withdrew from politics for years.

He said, “What I love about her is she’s completely unpretentious in an era where the political class, especially in Washington, I think, is rife with inauthenticity and hypocrisy. This lady is she is who she is. She’s got a great sense of humor. She’s got a folksy charm about her, but yet, as a former Marine, she’s tough as nails.”

McDonnell said, “She’s just got a complete package of skills that’s very endearing. You can see how much people like her genuinely tonight, and I think she’s going to have an outsized role as lieutenant governor, you know, more than banging the gavel and seeing if the governor’s still alive. I mean, she’s going to be a leader, I think, on policy issues, and we’re all really excited about her leadership.”