“Mr. Wheeler’s tenure as Donald Trump’s EPA Administrator set back our national climate policy by a generation. We cannot afford more of the same in Virginia,” Filler-Corn said in a press release.

In the committee, Delegate Alfonso Lopez (D-Arlington) listed top Democratic concerns: “Under your leadership at the EPA, it appeared as if you were intentionally trying to dismantle the agency and eliminate EPA safeguards. You went out of your way to undermine the EPA’s role to protect public health and the environment. In just your first twelve months, Mr. Wheeler, you sidelined scientists, you proposed to restrict the use of scientific data,  you gutted the coal ash rule, you recommended unsafe levels of drinking water contaminants, you rolled back clean water acts protections, you suppressed an inconvenient formaldehyde report which concluded that it would cause leukemia and nose and throat cancer, you ignored EPA scientists’ advice to ban asbestos, you weakened the mercury emissions rule, you slammed vehicle emissions rules into reverse, you  rescinded the clean power plan, whose goal was to dramatically cut carbon emissions, which was a gift to the coal industry, and to make matters worse, for folks who care deeply about the Chesapeake bay, you proposed a 90 percent cut in funding for the EPA’s Chesapeake bay program.”

Lopez said, “My question is, why shouldn’t every Virginia environmentalist, or person who cares about renewable energy, or parent who cares about their children not breathing dirty air or having clean drinking water, be scared out of their mind that you might potentially become the Secretary of Natural Resources and have sway over the DEQ [Department of Environmental Quality]?”

Wheeler answered, “First of all, you raised a number of issues, and I would love to address every single one of them, and I would be happy to meet with you to go over each of the  ones on your list, but there’s a few in particular that I do want to address. But all of them are inaccuracies as far as the record. We cleaned up the air, seven percent reduction in air [pollution], water quality when I left office was as clean as it’s been in the country. I protected children’s health through the lead and copper rule that I just mentioned.”

“On the Bay funding: you’re referring to the bay funding for the Chesapeake Bay geographic program, which is $82 million. There are about a dozen geographic programs across the country. None of them were ever authorized by Congress. OMB [Office of Management and Budget] at the White House cut the funding for all of those geographic programs knowing that Congress would restore the funding. That was only $82 million, most of that went to salaries and the building, which I knew would already be paid for anyways regardless of what was in the budget. But what I also knew was $82 million is not enough to clean up the Bay,” Wheeler said. “While that political debate was going on between the White House and Congress, I looked to provide funding for the Bay programs.”

Wheeler said he found funding for projects in Hampton Roads, Pennsylvania, and the city of Baltimore.

“So overall, although $500 million in the two-year period that I was administrator, I committed to over a billion dollars in programs to clean up the Bay, which is compared to the $82 million that was a political fight, I thought it was more important to get the projects completed that will get the bay cleaned up.”

“On formaldehyde: I did not suppress the report,” Wheeler said. “It’s called an IRS risk assessment that has no regulatory impact at all, it had been mired in scientific politics between different scientists and different offices within the EPA as well as other federal departments. What I did was put formaldehyde on the TSCA [Toxic Substances Control Act] list for it to be reviewed as one of the first 20 chemicals under the new TSCA law that can end up in regulations.”

“So I had the choice between spending a lot of time and capital on a risk assessment that was not really going anywhere, or actually putting it in the hands of the people that can make a regulation to limit the use of formaldehyde, and I chose to put it on that regulatory track,” Wheeler said.

“On asbestos: we actually moved to close the loopholes on asbestos. Currently, under current law, you can still import some products that contain asbestos. It’s not been banned. All asbestos has not been banned. I had to be careful when I was the EPA administrator not to pre-judge a regulatory decision when you start a process, because then it’s grounds for being overturned in court. I’m no longer the EPA administrator, so I can say that I put asbestos on the track to be completely banned across the country, closing a loophole that had been in place since the early ’90s when the George H.W. Bush administration tried to ban asbestos and the courts struck down half of their regulatory approach.”

“There’s a lot of misinformation about what I did at the agency and I stand by my record that the environment improved under my watch, and on the EPA side, I did not try to dismantle the agency. By my last year, we were on boarding more people than were leaving the agency, when I got to the agency over 40 percent of the workforce was eligible to retire.”

Wheeler and the Gentler Senate Conservation and Natural Resources Committee 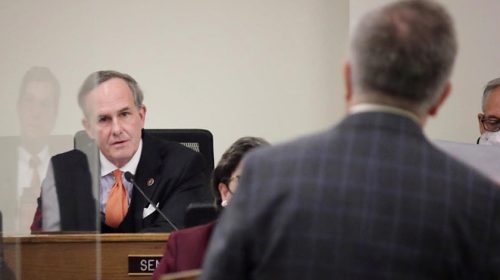 In the Senate Agriculture, Conservation and Natural Resources (ACNR) Committee on Tuesday, senators asked Wheeler about his background and his policy. He said that he would work to implement the Youngkin administration on its policy priorities, but would respect the authority of the General Assembly.

Wheeler highlighted his decades of experience, touted progress made on pro-environmental goals, and criticized media coverage of his background. An Eagle Scout, Wheeler said he is an avid hiker and camper, and said his favorite job was as a nature conservation director for a Boy Scout summer camp.

Senator Joe Morrissey (D-Richmond) asked Wheeler, “Why do you think you’re such a lightning rod of controversy?”

Morrissey said, “I’ll be clear, what I’ve heard today, the particular things that are important to me, all sound good. Why do you think you are that lightning rod?”

“First of all, I don’t think the things that I did at EPA were covered very well by the press,” Wheeler said. “On a daily basis there were positive things that were never covered.”

“The broader policy decisions that he made and that the administration made happened before I got to the agency,” Wheeler said.

The Republican-controlled House of Delegates is expected to confirm Wheeler, but Democrats control the Senate. Wheeler will need at least one Senate Democrat to support his confirmation.

He said, “If there is an effort to remove one of the designated secretaries, I expect it will break down on a partisan vote situation, which could lead to some unpleasantries.”

“We interviewed him, and he was very intelligent, and obviously very learned. We’ve had a lot of concerns about his record at the EPA, I’m still sorting through all the information,” Petersen said.

Morrissey, another occasional swing vote, said, “Let me just say this: I am a staunch, rabid environmentalist.”

“Let’s be clear, he answered those questions with specificity, he was straightforward, and he acquitted himself very, very well in front of that entire panel,” Morrissey said. “As I said yesterday, if it had been a Democratic appointee that gave those answers you’d be clapping and cheering. So all I’m saying is that I’m being respectful, I’m listening to what he says, I’m doing additional homework, I’m meeting with other stakeholders, including environmentalists. And then I’ll do what I always do: I’ll make a decision about what’s best for the Commonwealth, not me, not my party.”