Kiggans, who is running for Congress, told the subcommittee that she was carrying SB 570 on behalf of the Youngkin administration. 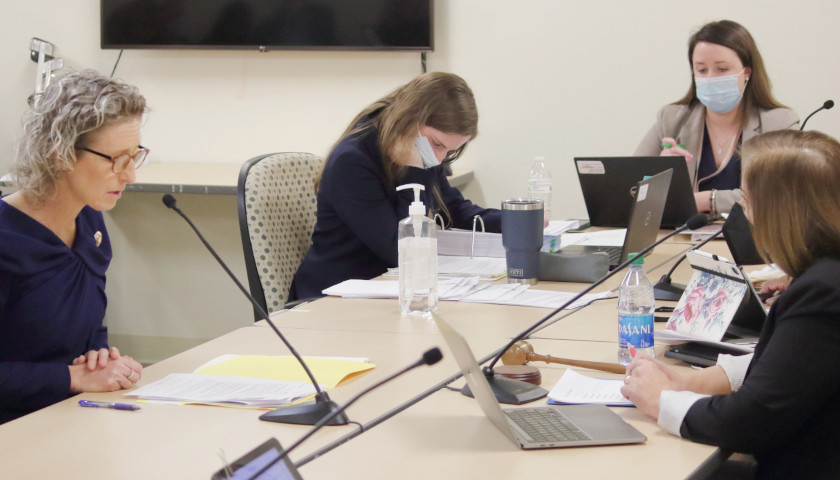 “I said yes to carry this bill because I heard the voices of parents that spoke in November. You know, I was one of those parents as well,” Kiggans said, noting that Youngkin frequently talked about teaching kids how to think, not what to think.

“I also just wanted to point out that this bill is not about Critical Race Theory, in my opinion. It’s not mentioned in the bill, those words are not in it,” she said. “This bill specifically in the language prohibits inherently divisive concepts in the classroom, which violates the Civil Rights Act of 1964. It ensures that one race, sex, or faith is not taught to be inherently superior to another race, sex, or faith.”

“I mean, there’s just something that rubs me the wrong way about this, and about this whole idea of creating a curriculum and instruction of inherently divisive concepts being prohibited when I don’t even know how that is being defined,” Locke said.

Superintendent of Public Instruction Jillian Balow spoke in favor of the bill.

“This bill is part of Governor Youngkin’s Day One Game Plan,” Balow said. “It prohibits the teaching of inherently divisive concepts from curriculums by requiring each public school principal to ensure that instruction of divisive concepts are not incorporated into existing curricula or delivered in public school with collaboration with any individual or entity.”

Youngkin’s Executive Order One tasks Balow with reviewing Virginia’s curriculum, policy, and other materials to find and remove “inherently divisive concepts.” If passed, SB 570 would be more permanent than the executive order.

“The bill does define inherently divisive concepts as those that advance ideas that are in violation, direct violation of the Civil Rights Act of 1964,” Balow said.

Locke and subcommittee Chair Ghazala Hashmi (D-Chesterfield) voted to recommend killing the bill; Peake voted in favor of the bill. That illustrates a broader challenge for the Youngkin administration — while it can achieve temporary change through executive order, the Democrat-held Senate is in a position to block more permanent changes to Virginia’s laws.

Kiggans told the subcommittee, “This is a bill that ensures that we protect girls’ sports,” Kiggans told the subcommittee. “I think that we can’t ignore the biological realities that sometimes can hurt women by allowing transgender students to play in sports. I feel like the girls deserve a level playing field. There’s some biological advantages that males have over female athletes, despite some of the hormone treatments that are out there.”

Lobbyists from a few groups including The Family Foundation spoke in favor of SBs 766, 570, and 20, but there were more lobbyists and advocates in opposition, including from the ACLU of Virginia.

“I want to reiterate that this bill aims to strip trans athletes of their identity and dignity by banning them from participating in athletic teams and mastering gender identity without any basis in science,” ACLU-VA policy and legislative counsel Rihanna Diaz said.

In 2020, the Virginia General Assembly passed a law requiring the Virginia Department of Education to create model policies for the treatment of transgender students, and requiring school boards to adopt policies consistent with the model. Hackworth’s SB 20 removes the school board requirement.

“It does not repeal the directive for VDOE to create model policies for the treatment of transgender students and it does not prohibit local school boards from incorporating any or all of the recommended policies or creating their own individual policies. Simply put, this bill gives the authority back to the local school boards to decide what is best for the locality,” Hackworth said.

Locke and Hashmi voted to recommend that the Education and Health committee kill the bills. Peake voted against killing the bills.

Eric Burk is a reporter at The Virginia Star and The Star News Network.  Email tips to [email protected]
Photos by Eric Burk.