NASHVILLE, Tennessee- As a journalist who covers rising musical artists, I get sent a lot of songs to preview, way more than I could ever write about. But I try to give each band/artist a quick listen to see if this is something I want to further pursue. When I heard Hippies and Cowboys’ “20 to Life” it was an easy choice to make. I wanted to know more about this band that was dubbed “Rock and Soul.” 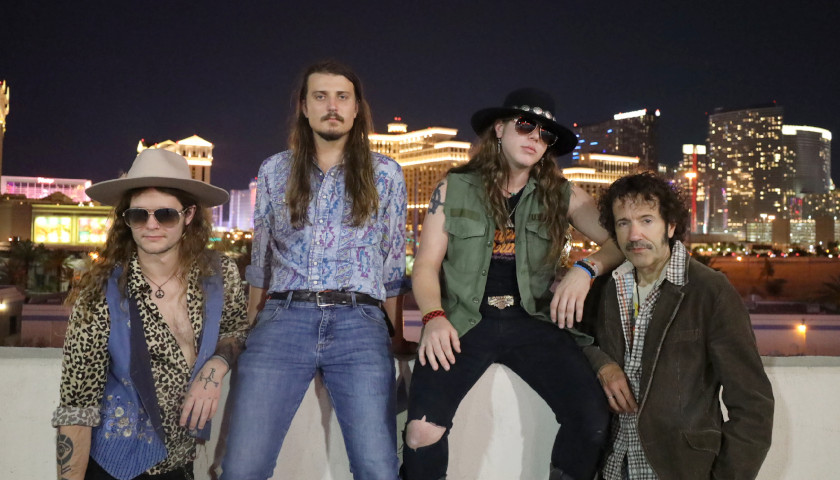 Sparling’s dad was the road manager for Vern Gosdin. His uncle was also a musician and young Sparling was often taken to these gigs, where he was exposed to the real-deal classic country as a child.

He picked up the guitar at age 6 and began playing it non-stop. He formed basement bands with his buddies. He dropped out of school in 10th grade to pursue music full-time. (Many music icons who we now revere also did the same thing.)

Metko states that Sparling is a self-taught, natural musician/singer/talent. Metko met him at age 22 at his uncle’s house in Kokomo, Indiana. Metko was playing for ’90s country star David Ball.

After the show, young Sparling says to Metko, “Hey, I’m moving to Nashville in a month. Do y’all want to be my band?”

“This precocious 22-year-old kid is trying to steal the band of a platinum-selling, Grammy Award-winning country artist,” Metko reported.

The guys in Ball’s band were floored. They couldn’t believe Sparling even had the guts to ask such a question. They replied, “If you’re in Nashville in a month, we’ll be your band.”

They never expected to hear anything more from this big-talking wannabe musician. One month later, Metko’s phone rings. Sparling was ready to go.

When they started rehearsing, Metko realized that Sparling can sing anything; John Fogerty, John Mellencamp, Bob Seger, Nirvana, Guns N’ Roses, AC/DC- even Steven Tyler and Robert Plant, among the most difficult male rock ’n’ roll vocalists to copy. He was better than anyone Metko had ever heard. He thought, “I don’t know where this is going, but I am going to stick with this.”

Sparling is a prolific songwriter and in 2020, they had nothing to do other than write songs and practice. Nashville was shut down. That’s when the guitarist got the urge to go to Memphis. Aaron Sparling’s mom and dad had listened to a lot of rock ’n’ roll. His dad’s father was a preacher and they sang a lot of gospel. He listened to quite a bit of Elvis and Johnny Cash, who both hailed from Memphis. Sparling explained, “I grew up loving Memphis before I even knew what Memphis music was. I liked the sound.”

As he got older he got more into classic rock and eventually moved to Nashville, where he got into soul music like Otis Redding and old Stax records. Sparling felt the classic music calling him as they sat in with some of the local house bands in Memphis.

Metko sent Sparling the link to the documentary on Muscle Shoals.

After watching, Sparling told the band, “Man, nobody’s doing this horn thing. I’m feeling this soul thing. We’ve got to do this.”

“I realized that the music I’ve been listening to for so long was coming out of Muscle Shoals and Memphis,” recalls Sparling.

Sparling felt a kinship to the rockabilly-bluesy sound of Memphis and Muscle Shoals. Eventually, they booked a week at the renowned Fame Recording Studio in Muscle Shoals where they recorded 14 songs.

When Hippies and Cowboys was assembled a few years back they didn’t really know which direction they would take. They naturally performed crowd-pleasing covers because Sparling can play/sing anything.

However, they all eventually figured out that all had this huge bond over soul music. They decided to write “cool stuff like that” and make a rockin’ soul record.

One of the things that most surprised me about Hippies and Cowboys is that its members were all so young. Three of the band members are well under 30 and yet they embrace so much of the musical influence of the past.

Metco, the eldest of the group describes his bandmates as, “old soul rockers trapped in 25-year-old bodies.”

“I guess we were just born into the wrong generation. We’re old souls,” quips Sparling.

Hippies and Cowboys is currently finishing up its debut album. The band will continue releasing singles from it until the entire record is available later this summer. In the meantime, you can hear them play in Nashville at Kid Rock’s, Johnny Cash Museum, and The Tin Roof.

Says Sparling, “It’s our mission to do music that we like to do, but also that everybody else will enjoy too and that it lasts forever.”

Hippies and Cowboys perfectly captures the essence of classic rock ’n’ roll with a taste of country blues. The mix between lead singer Aaron Sparling’s distinct gritty vocals, crisp guitar riffs, and a rich saxophone makes for a high-energy debut in the Southern rock scene. “20 To Life” is sure to resonate with music fans from all generations.