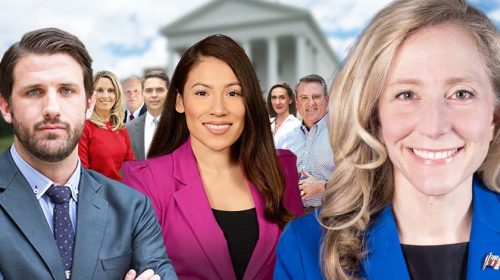 “If Joe Biden’s approval rating ticks down another five points, then we probably win VA-10,” he told The Virginia Star. “If it ticks up five points, it’s probably out of hand. If it stays about where we are, we probably have a jump-ball shot. If we win in Virginia 10, we’re going to crush in the House of Representatives in November.”

“It’s [VA-10] not in the 16 that we need to win, right? Whereas probably like Virginia’s 2nd district, if we lost that, we probably don’t have a shot at winning the House,” Deutsch said. “Seven and 10 are both probably on the outer edge of the wave.”

On Tuesday evening, candidates for the GOP nomination for VA-10 met in a forum in Loudoun County. In a straw poll after the forum, Loudoun-area businessman Caleb Max took first place with 33 percent, followed by Loudoun County parent Brandon Michon in second, and retired Navy Captain Hung Cao took third.

“Caleb, a small business owner who was raised in the 10th district understands what the voters care about,” Max’s campaign said in a press release.

Prince William County Supervisor Jeanine Lawson, thought to be one of the front runners, took sixth out of the 11 candidates.

Deutsch, a supporter of Lawson, said that straw polls can be unreliable due to regional representation, and whether or not all the candidates are present at the event. Lawson was at a Prince William County budget meeting, not at the forum. Deutsch said that often it’s better to look at multiple straw polls from multiple events.

“Really, a straw poll just says of the people who showed up at this event, what did they think. I mean, it’s a lick-your-finger-in-the-wind, one indicator,” Deutsch said.