“I cannot thank you enough for what you did here in Virginia last year,” Noem said. “I talk about you everywhere I go.” 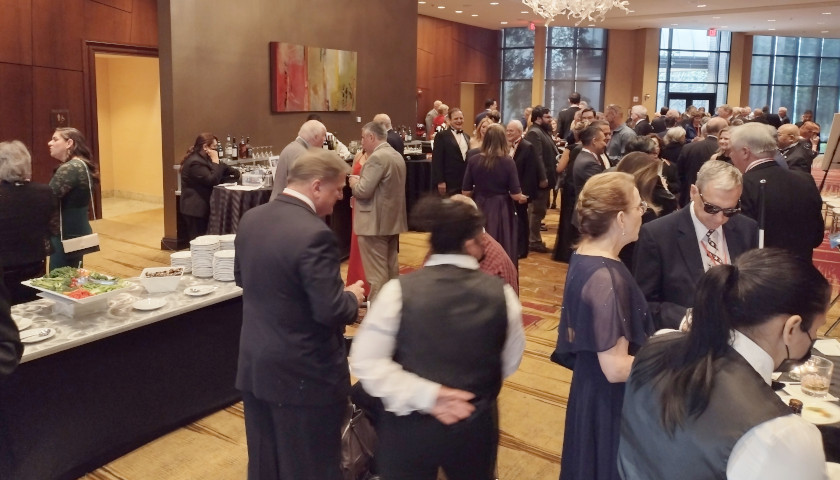 Noem traced her history from childhood to operating the family businesses after her father died to the state legislature to Congress to the governorship.

“I think we’re crippling our children because we’re doing everything for them. My dad often gave us stuff that we just thought, as kids, he was trying to kill us,” she said.

She told a story of her father telling her to drive a loaded semi-truck home from one of the family’s fields.

“When it finally stopped, I thought to myself, ‘I cannot believe that I lived.’ But the next thought that I had was that ‘I bet I could drive anything now.'”

Noem noted that most of the RPV attendees probably hadn’t heard of her before she gained attention for her COVID-19 policies as governor.

“I stood up in front of my people and just told them, listen, we are going to give you all of the science and the data and the facts. And then I’m going to trust you,” she said.
s
“We ended up being the only state in the entire country that never once closed a single business. In fact, I didn’t even define what an essential business was in our state because I don’t believe that governors have the authority to tell you your business is essential,” she said.

She also described her response to social unrest and negative perceptions of law enforcement after the police killing of George Floyd.

“I decided to do a national marketing campaign to law enforcement telling them that if you wanted to live somewhere where people respected you, then move to South Dakota,” Noem said.

“Every reporter would try to drag him off down the Trump road, and try to create division, and he was so disciplined to keep his focus on the kids and in the classrooms, and exactly what people here cared about,” she said.

Noem said that 2021 Republican wins in Virginia are giving hope and have been noticed “around the world.”

She exhorted those in attendance to run for office, volunteer for campaigns, and donate.

Earlier in the day, attendees had the opportunity to attend breakout sessions on topics including Northern Virginia politics, a General Assembly recap, and school choice.

Speakers at a breakout session on media told attendees about the power of social media.

J. Garren Shipley, spokesperson for Speaker of the House Todd Gilbert (R-Shenandoah), described how it’s often easier to engage with the public directly instead of trying to battle for the attention of the diminishing number of reporters and battle their biases.

“This is a t.v. studio in your hand,” he said while holding a smart phone. “This is the most powerful weapon that a conservative has. Now, just like any weapon it can be misused, and it can cause great, great damage to yourself and others.”

He said attendees can start by challenging misconceptions about legislation, and highlighted a recent Florida bill nicknamed the “Don’t say gay” bill.

Shipley said, “Go post, ‘Hey, has anybody read the bill? Here’s a link to this legislation. Read it yourself.'”

In a session on election integrity, a panel of Republican lawyers focused on the need for Republicans throughout the framework of the elections, from the volunteer poll-watcher level up to the Board of Elections — even in a state where Republicans have been unable to reverse Democratic changes to election law.

“Coming off of the heels of the 2020 cycle, Virginia really presented a critical need to invest in political and legal efforts in election integrity operation,” Republican National Lawyers Association Deputy Director Christina Norton said. “This was really an opportunity for the [Republican National Lawyers Assocition] and for the RPV and other partners to really regain that confidence with voters.”

Attendees also had the opportunity to continue networking throughout the day, including with VIPs in a closed reception and informally.

“I had a very awesome moment with the governor [Youngkin] today, out back, and I just gave him a big ol’ hug,” former Prince William County GOP Chair Tim Parrish told The Virginia Star. “It was just an opportunity to connect with him and just reminded me that although he’s the Chief Executive of the Commonwealth of Virginia, he’s kind of still that dad and you can go get an embrace from him.”

Media was not allowed to hear Youngkin speak at lunch.

Summarizing Youngkin’s speech, Parrish said, “He’s fired up about unity in the Republican party and coalescing not just Republicans but Virginians behind our values, our conservative values, and what we believe. And he is on a mission, won’t be stopped, to win back our House of Delegates, and our Virginia Senate and take a majority of our congressional delegation by sending three more Republicans in the second, seventh, and tenth [districts] to Congress.”

Virginia’s Republican National Committeewoman Patti Lyman told The Star, “A big part of this experience for me is just interacting with the constituents that I represent to the national party. The profile of Virginia in the national Republican Party has been revolutionized in the last year to a year-and-a-half. The things that have happened here have been so significant, they’re having an impact on every other state nationally.”

She said, “I’m hearing people are on top of the world, and they’re so excited. They have hope, they have hope for us winning back three or four congressional seats in Virginia, and they have hope because the things that we did in Virginia on election integrity, on election security., those things have been put together and they’re being taught to people in states all around the country. They’re calling it the Virginia model.”

Eric Burk is a reporter at The Virginia Star and The Star News Network. Email tips to [email protected]

One Thought to “South Dakota Gov. Noem Introduces Herself to Virginia GOP Insiders on Second Day of Advance”