Snow and Biberaj used to practice criminal defense and civil law together in Leesburg. Biberaj has come under fire from Republicans for embracing a progressive prosecutorial philosophy.

“While we heard generally favorable reviews of this particular candidate’s time on general district court, I think that there were significant concerns over the fact that he was the 15-year law partner of the Loudoun County Commonwealth’s attorney. And despite her high-profile campaign for election in which she made quite clear her views on prosecuting crimes or not prosecuting crimes, this judicial candidate followed her into the commonwealth’s attorney’s office and operated as her deputy commonwealth’s attorney until becoming a judge. That raised significant concerns among members of our caucus,” Obenshain told The Virginia Star.

“I sincerely hope that this judge does not, in fact, hold that same philosophy. We’ll have an opportunity to see and hear in the years to come,” Obenshain said. “We’re exercising caution.”

Obenshain said that it’s tradition to not vote against judicial candidates, but that the 21-0 vote in the Senate was a close vote given that candidates need a majority of all members, not just those voting, to be confirmed.

State Senator Jennifer Boysko (D-Fairfax) criticized Republicans for politicizing the judicial selection process, which is meant to be fair and non-political.

“I can’t believe it,” she said in a floor speech. 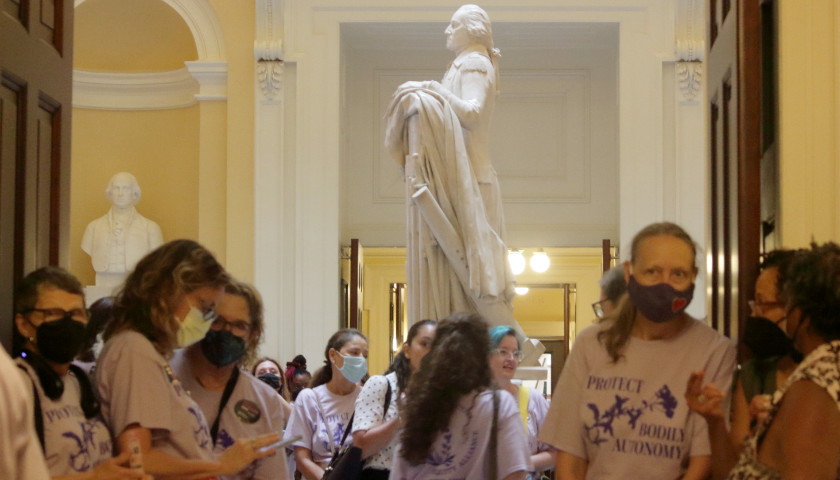 Before leaving for the day, the Republican House of Delegates adjourned sine die in a party-line vote, effectively ending the special session that has been periodically reconvened throughout the year, but the Senate did not, creating ambiguity about the status of the general assembly and potential future action.

Legislators didn’t consider any new legislation on Wednesday, but pro-choice groups rallied on the Capitol grounds after earlier expressing fears that Republicans would try to pass an abortion ban.

“I’m angry that I am the first generation of my family to lose a constitutional right,” State Senator Jennifer McClellan (D-Richmond) said at the rally. “I am angry that my daughter who I almost died giving birth to could have government insert itself into her decisions about whether, when, and how to become a mother.”

Virginia Republicans said in advance that Wednesday’s session wouldn’t include any abortion-related legislation. Governor Glenn Youngkin and others have said they’re working on a pain-threshold 15-week abortion ban to introduce in 2023, but other Republicans and activists said in a rally earlier this summer that that doesn’t go far enough.

For that ban to pass in 2023, Republicans will need unexpected help from Democrats to get the bill out of the Senate. They’ll also need to limit defections within their own party in the House.

Delegate Emily Brewer (R-Isle of Wight) told reporters that the next few months need to be focused on a discussion about what Virginians actually want. She said she’s pro-life at the moment of conception, but didn’t call for a ban from conception or say she’d support a 15-week ban.

“We have no real legislation,” she said, noting the split control of the general assembly and saying she wouldn’t weigh in on something she can’t read, although she did focus on reducing the window of time abortions are currently legal during a pregnancy.

She said, “I could still have an abortion in Virginia. I find that the majority of Virginians will probably find that unconscionable to see that someone is actually showing, actively, very pregnant, not even just a little bit.”

“I think anything reducing the number of weeks is a step in the right direction from my perspective. But that’s a conversation every single member of our chamber is going to have to have with their voters. And that’s something we probably need to ask them: where are they at between one and 40 [weeks]?”

Eric Burk is a reporter at The Virginia Star and The Star News Network.  Email tips to [email protected].
Photos by Eric Burk.