RICHMOND, Virginia – Republicans and gun rights activists rallied at the Virginia Capitol on Monday, known as Lobby Day. They said this year’s General Assembly would be focused on blocking gun control legislation and on picking like-minded candidates for primaries and in the November general election. At a separate rally and a press conference Monday, Democrats announced measures to prevent gun violence, but with Republicans controlling the House and Democrats controlling the Senate, both parties are likely to have little success in passing legislation.

“We’ve heard from the Virginia Senate that they’re the brick wall,” Delegate Tim Anderson (R-Virginia Beach) told the crowd outside the Bell Tower. “We saw them kill a lot of legislative priorities last year from Republicans. But what you’re going to see this year: the Democrats have dropped a lot of anti-Second Amendment bills, and what you’re going to see is this Republican majority in the House stand up to that and kill that in our public safety committee. And so that’s a big thing. You’re not going to see repeals of all of the laws that have offended us that the Democrats passed in 2020 and 2021, because while we can get them out of our house, they will die in the Senate.” 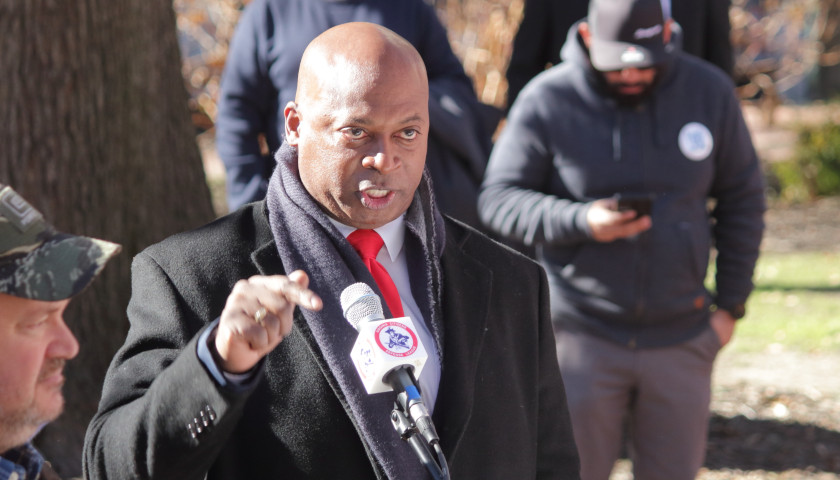 Virginia Citizens Defense League (VCDL) President Philip Van Cleave told The Virginia Star that there is legislation to repeal the local authority to pass gun control measures, to repeal red flag laws, and to allow constitutional carry. He said that gun control doesn’t solve violence, and grappled with the tragedy at a Newport News school where a six-year-old in Newport News allegedly shot a teacher earlier in January.

“As far as schools go, for example, anybody that has a concealed carry permit should be able to carry in school. The teacher could have been carrying. Oh God, wouldn’t that have been a nightmare. What the hell do you do there? But what are you going to do? He’s going to kill you — what a weird — in my seventy years on this planet, I have never heard of anything about a student at that age, going in, and wanting to kill somebody,” he said.

Van Cleave said school shootings are a societal problem that didn’t exist when he was in school.

“But we’re seeing more and more of that. It’s like feral children, feral people growing up to be adults, and they can be downright dangerous. It’s a big problem to solve because banning guns wouldn’t change it. It’s a matter of getting the schools to teach people morality, respect, and about good things like about their Constitution and their country,” he said.

House Democrats touted over a dozen bills in a Monday press release, including legislation to ban the sale of high-capacity magazines and assault weapons, to increase the minimum purchasing age to buy assault weapons, and a bill to study the effects of gun violence on communities.

“Gun violence impacts all of our communities – urban communities and rural communities; white, Black, and Latino communities. It impacts kids and adults, impacts us in our schools and in our homes,” Minority Leader Don Scott (D-Portsmouth) said in the release obtained by Blue Virginia. “Make no mistake: This is an epidemic harming all of us. And gun violence is entirely preventable. So, we can’t wait. Virginia can’t wait. Our constituents can’t wait.” 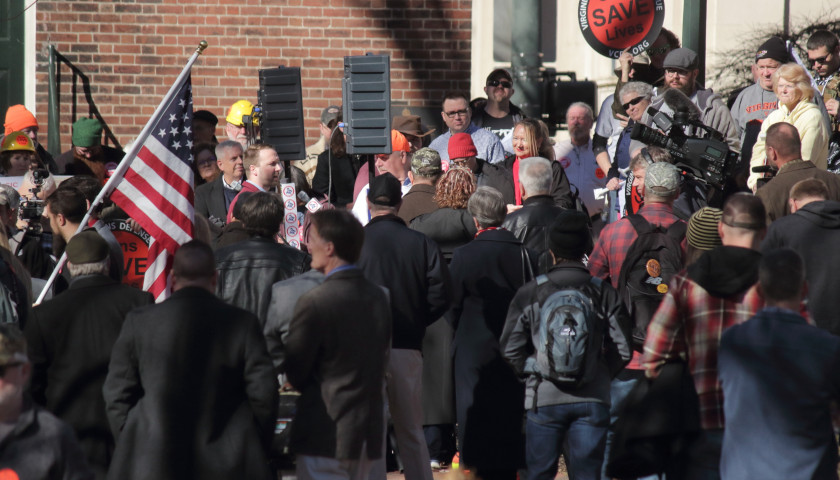 “Every year, more and more Virginians and their families experience gun violence – on our streets, in our schools, on our college campuses, in our places of worship. House Democrats want to make clear – we don’t have to live like this,” Delegate Patrick Hope (D-Arlington) said. “These proposals are popular ideas and each and every one will save lives. We hope Republicans will work with us on some of these efforts so that we make communities safer.”

State Senator Jennifer McClellan (D-Richmond), who is running for Congress in the special election for Virginia’s 4th District, told the senators, “I challenge you, my colleagues, today: when you honor Dr. King today, and every day, continue to ask yourself, ‘What am I doing today and every day to achieve his dream of a beloved community? Dr. King knew he wouldn’t achieve it in his lifetime, but he had a hope and a faith that we will continue his work.”

At the VCDL rally, the Republican nominee for the race Leon Benjamin said, “This is Martin Luther King Jr.’s birthday, right? If he was here today, he’d be 94 years old, and he would be right in the middle of the VCDL, he would be right here bringing everyone together. This is not a Republican thing. It’s not a Democrat thing. This a God and country and family and gun thing.”

Eric Burk is a reporter at The Virginia Star and The Star News Network. Email tips to [email protected]ews.com.
Photos by Eric Burk.