Congresswoman Abigail Spanberger (D-VA-07) was one of just five House of Representative Democrats who did not vote for Congresswoman Nancy Pelosi (D-CA-12) to continue as Speaker of the House in the 117th Congress.

“In a time marked by historically low trust in our government, new voices are necessary to moving forward and achieving real progress,” Spanberger said in a press release. “Last Congress, I kept my promise to vote for new leadership upon my swearing-in – and in this Congress, I remain consistent in my commitment to ushering in new leadership. Accordingly, I did not vote for Speaker Pelosi.”

Spanberger voted “present.” With some members absent and some seats vacant, Pelosi didn’t need a majority – she just needed more votes than lead opponent Minority Leader Kevin McCarthy (R-CA-23), who won 209.  Pelosi won 216, a narrow margin that in other years would have been a loss. She’s just the sixth Speaker to be elected with less than 218 votes in the 435-seat House, according to the Congressional Research Service.

Spanberger is positioning herself as an independent-minded moderate Democrat. Although her re-election in the November 2020 election proved she’s not going anywhere soon, she only won her district with 50.82 percent of the votes, according to The Virginia Public Access Project (VPAP). 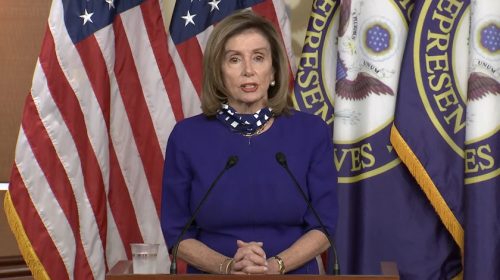 In audio of a post-election call, she blasted liberal Democrats for causing some Democrats to lose their races. “We lost members who shouldn’t have lost,” she said according to USA Today. “We need to not ever use the words ‘socialist’ or ‘socialism’ ever again because while people think it doesn’t matter, it does matter. And we lost good members because of that.”

Also voting against Pelosi were all the Republican representatives from Virginia, who joined the rest of the Republican caucus in voting for McCarthy.

“Honored to have just cast my vote for@GOPLeader for Speaker of the House, supporting a commonsense strategy to get our nation on the right path to recovery,” Congressman Rob Wittman (R-VA-01) tweeted.

Spanberger said January 2021 was a crucial moment in American politics. “With this incoming administration, we have a unique opportunity to achieve long overdue progress on a wide range of pressing issues – such as lowering healthcare costs, tackling the climate crisis, working towards inclusive justice in all policy areas, investing in our infrastructure, and building an economy that creates opportunity for everyone.”

She added, “While we will not have new leadership in the Speaker’s Chair, it is my hope that the American people will witness a broader breadth of voices in Congress leading in pursuit of these policy objectives.”