During the 2019 shareholder season, Justin Danhof, general counsel for the National Center for Public Policy Research, tabled a shareholder proposal at Amazon’s annual meeting. “Diversity in board composition is best achieved though highly qualified candidates with a wide range of skills, experience, beliefs, and board independence from management,” it read. Uncontroversial, one might think, but Danhof was booed and heckled throughout his presentation. Afterward, a representative for Arjuna Capital (which “works with high net-worth individuals,” its website says) told Danhof that he was simply trying “to protect white males.” A representative of the Nathan Cummings Foundation (with $424 million of cash and investments, on its most recent balance sheet) made clear that Danhof was unwelcome and should hasten, lest he be late for his next Klan meeting or book burning. 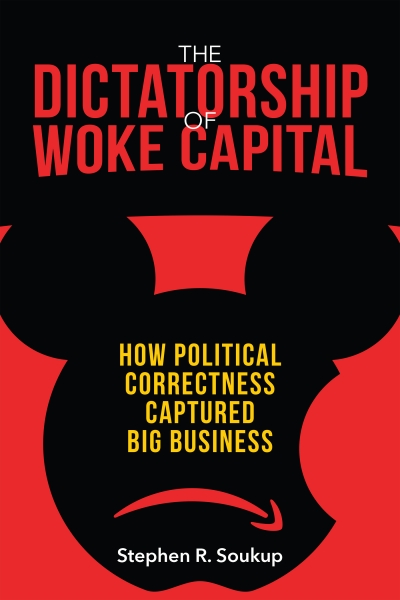 The incident is recounted in Stephen R. Soukup’s The Dictatorship of Woke Capital (Encounter Books). What explains the greening of Wall Street and corporate CEOs becoming woke and dissing the system that made them rich? In part, it is a cheap way of buying protection – especially when shareholders are paying, as is the case with Marc Benioff, multi-billionaire CEO of Salesforce. “Capitalism, as we know it, is dead,” Benioff declared in the New York Times. Described as “one of the modern-day robber barons,” Benioff earned his billions from a series of acquisitions of profitless software companies and constant stock sales. Benioff’s schtick is “a confidence game in the true sense of the term,” says market analyst Ben Hunt.

Wokeness is not a system of morality with universal applicability. “With every breath we take,” Apple CEO Tim Cook declared in the wake of George Floyd’s death, “we must commit to being that change, and to creating a better, more just world for everyone.” Well, not for everyone – not for the tens of thousands of Chinese workers at Apple’s Foxconn iPhone factory at Longhua. In 2010, a spate of suicides led Foxconn to install nets outside many buildings to catch falling bodies.

Soukup notes that an advantage of Apple’s arrangement with Foxconn and its Longhua facility is “plausible deniability.” When that deniability is threatened with removal, Apple acts ruthlessly. In November, its lobbyists worked Capitol Hill to water down the Uyghur Forced Labor Prevention Act, which would require American companies to guarantee that they do not use imprisoned or coerced workers from the predominantly Muslim region of Xinjiang. “What Apple would like is we all just sit and talk and not have any real consequences,” says Cathy Feingold of the AFL-CIO.

Soukup also documents Disney CEO Bob Iger’s bullying of states like Georgia and North Carolina for passing laws that he dislikes – even as Iger disappeared minority actors from publicity for the Chinese market of Star Wars: The Force Awakens. There is indeed something nauseating about people claiming to be virtuous when they’re not, but to accuse Apple and Disney of hypocrisy would be to miss the point. Wokeness is directed at transforming America, using Wall Street and corporate America to help bring it about.

The Dictatorship of Woke Capital provides the best account so far of how finance capital ended up on the woke side of the culture wars. The book’s great strength is tracing the lineages of woke back to their sources. Soukup identifies two principal streams. The first, an all-American affair associated with progressives such as Richard Ely, Woodrow Wilson, and John Dewey, gave rise to the administrative state and the creation of a class of professional administrators unaccountable to voters and “trained in the ‘science’ of administration to manage society more rationally and carefully than the masses would, if left to their own devices.”

The second has its origins in Europe, with an assortment of Marxists and post-Marxists such as Antonio Gramsci, György Lukacs, and the Frankfurt School. It then proceeded, in the words of the German 1968-er Rudi Dutschke, on “the long march through the institutions,” the New Left successfully colonizing virtually the entire American system of higher education.

If anything, Soukup underplays the impact of Herbert Marcuse and the New Left. They had repudiated vulgar Marxism because the American working class refused to play the revolutionary role that Marx had assigned it, opening the way for the New Left’s rejection of industrialization and what a leading critic of the Frankfurt School called an “aesthetic repugnance for industrial society.” As willing customers of the “merchants of kitsch,” the American working class kept the system of oppression in business. The New Left transformed the American working class from oppressed into oppressors. The culture wars are in reality a class war waged against the working class and all those whose livelihoods depend on their work – in manufacturing, transportation, and farming and, most of all, in the energy sector.

This war will come to an end only when one side or another is beaten and knows it. The presidential election of last November 3 did not produce that outcome. Despite President Biden’s calls for unity in his Inaugural address, his actions since indicate the start of a new, aggressive phase in this class war. For that effort, the Biden administration will have enthusiastic allies on Wall Street and among woke CEOs in Silicon Valley and Hollywood. For those looking to understand how we got here, The Dictatorship of Woke Capital is the best place to start. Along the way, Soukup brutally eviscerates many of the ESG and stakeholder myths deployed to justify woke capital. This is a book for our times.