HENRICO, Virginia – Governor Glenn Youngkin held a campaign-style rally to ceremonially sign Virginia’s fiscal year 2023-2024 budget. On Tuesday, Youngkin spoke from the aisles of the Tom Leonard’s grocery store where he filmed a grocery tax-related campaign ad and where he held one of his final rallies during the campaign. 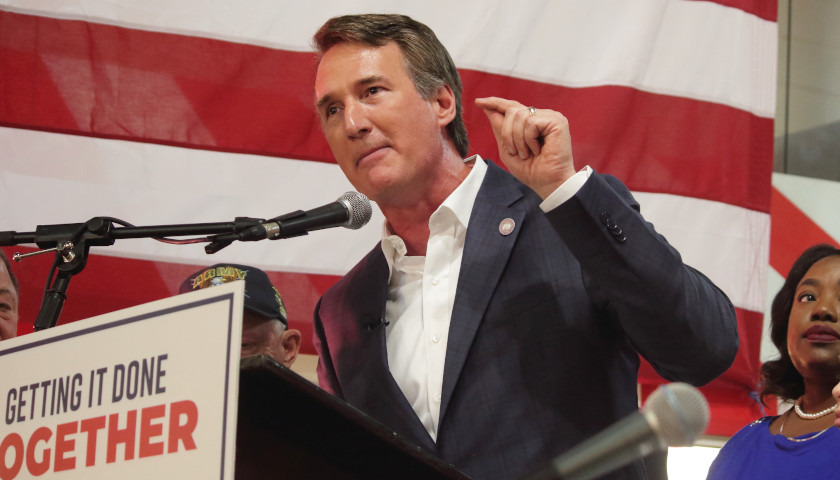 “Nine months ago we were right here with many of you, and we in fact were talking about the impact that the rising cost of groceries was having on families,” Youngkin said to a crowd of supporters, reporters, former GOP candidates, and current GOP politicians standing next to bins of produce.

Before and after Youngkin spoke, a professional-grade sound system played songs similar to those on his campaign playlist, featuring decades-old hits including “My Way,” “Gloria,” “Macho Man,” and “Spirit in the Sky.” Staffers in updated red Youngkin vests abounded, and media consulting firm Poolhouse was also present.

In 2021, Youngkin campaigned on “kitchen table” economic issues, calls for public safety, a call for increased education spending, and a ban on Critical Race Theory, and promised to launch 20 charter schools in Virginia. On Tuesday, Youngkin highlighted key proposals related to those promises.

“We defined our commitment to freedom and we went to work to reduce taxes, all on day one, and cut taxes we did. This budget we will sign today cuts taxes for the typical Virginia family by $1,100 a year,” he said. 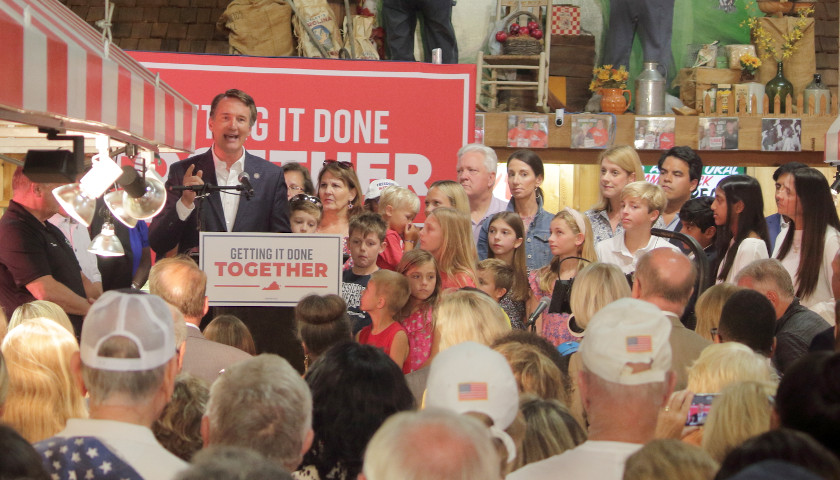 According to details sent by a Youngkin spokesperson, that $1,100 includes the $500 tax rebate for joint filers, increasing the standard deduction to $16,000 for joint filers, based on U.S. Census bureau data that the median household income in Virginia from 2015-2019 was $74,222. It also includes eliminating the state’s share of the grocery tax, 1.5 percent, saving a family of four $209 annually, based on USDA data.

The budget also includes a tax exemption on $40,000 of veteran retirement pay for veterans older than 55.

Youngkin highlighted other wins, including spending on law enforcement, job growth, and education.

“We passed, and I will sign, the largest education budget in the history of Virginia,” he said to loud cheers, and highlighted funding for lab schools.

But the budget isn’t a total win for Youngkin and doesn’t include everything he campaigned on. Legislators on both sides have emphasized the compromised nature of the result.

It doesn’t include a three-month gas tax holiday, a new goal for Youngkin since he took office. Lawmakers couldn’t quite reach doubling the standard deduction that Youngkin had promised in his Day One Game Plan proposals. Charter school proposals failed in the Democrat-controlled Senate, forcing Republicans to pivot to lab school proposals which got some bipartisan support. Youngkin called for repealing the whole 2.5 percent grocery tax including both state and local components, but the local component was left intact. The one-time tax rebate Youngkin campaigned on was $300 for individuals and $600 for joint filers.

“I am disappointed,” Youngkin said.

He ended with a reference to his “Day One Game Plan” messaging.

“While we celebrate today the signing of this budget, we will go to work this afternoon, this afternoon, to deliver all of the things that Virginians know we need in order to be just the best place to live, and work, and raise a family right now,” Youngkin said.

He said, “Ladies and gentlemen, it’s time to go to work. Get ready for day two.”